Searching the S&T Library catalog using the search term "Japanese American Internment"  will bring up a plethora of resources. You may need to log in to use electronic resources. Additional resources are listed below. 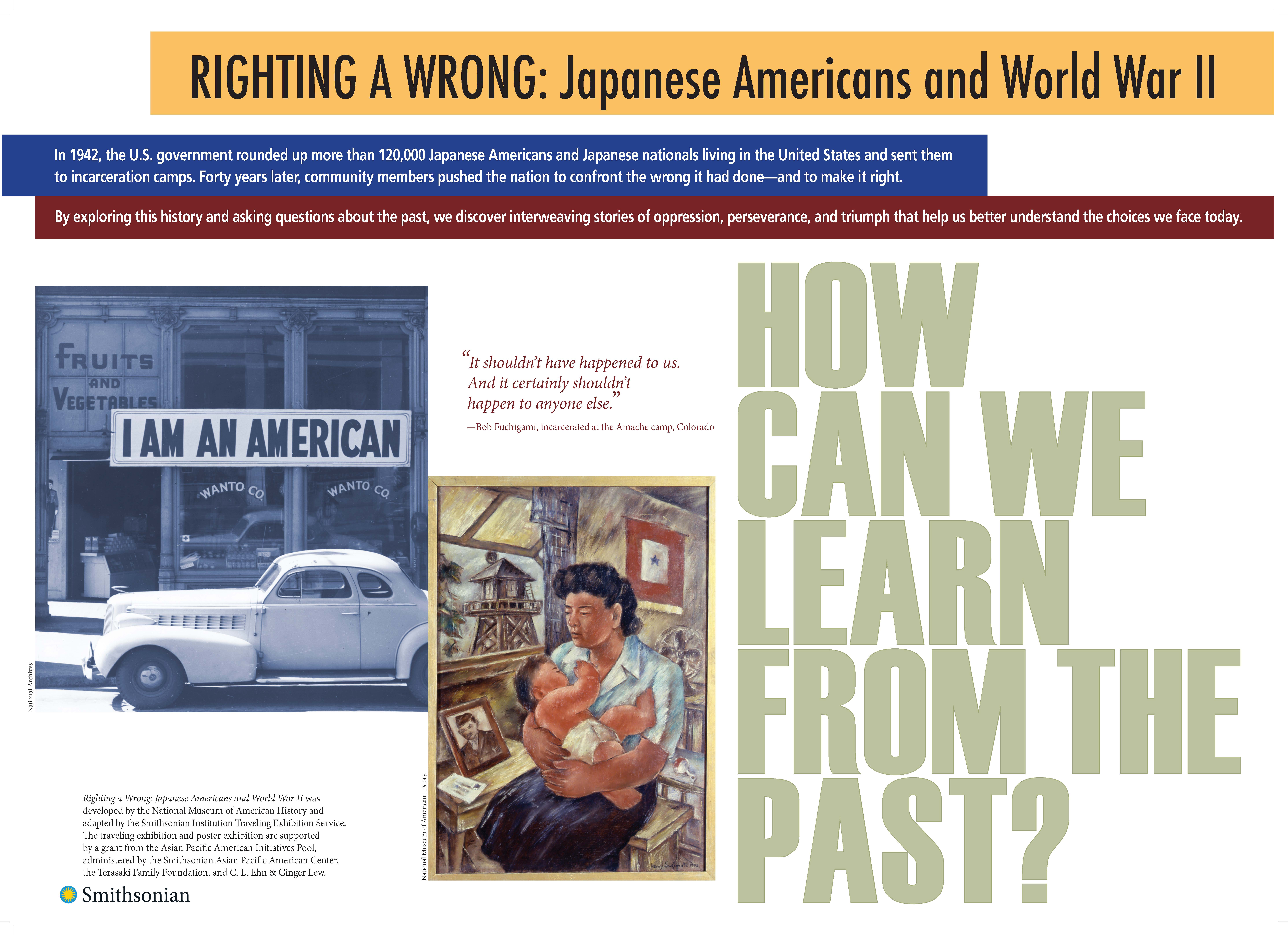 How can we learn from the past?

“I am an American.” Why would someone put a sign up with this message? What sort of building is it posted on? Who might have posted it?

“It shouldn’t have happened to us. And it certainly shouldn’t happen to anyone else.” Who said this quote and what was his experience? What is he warning us about?

Compare and contrast what is depicted inside and outside the room in this painting.What do you consider to be ordinary and extraordinary? What could this tell us about what it was like to live in an incarceration camp? 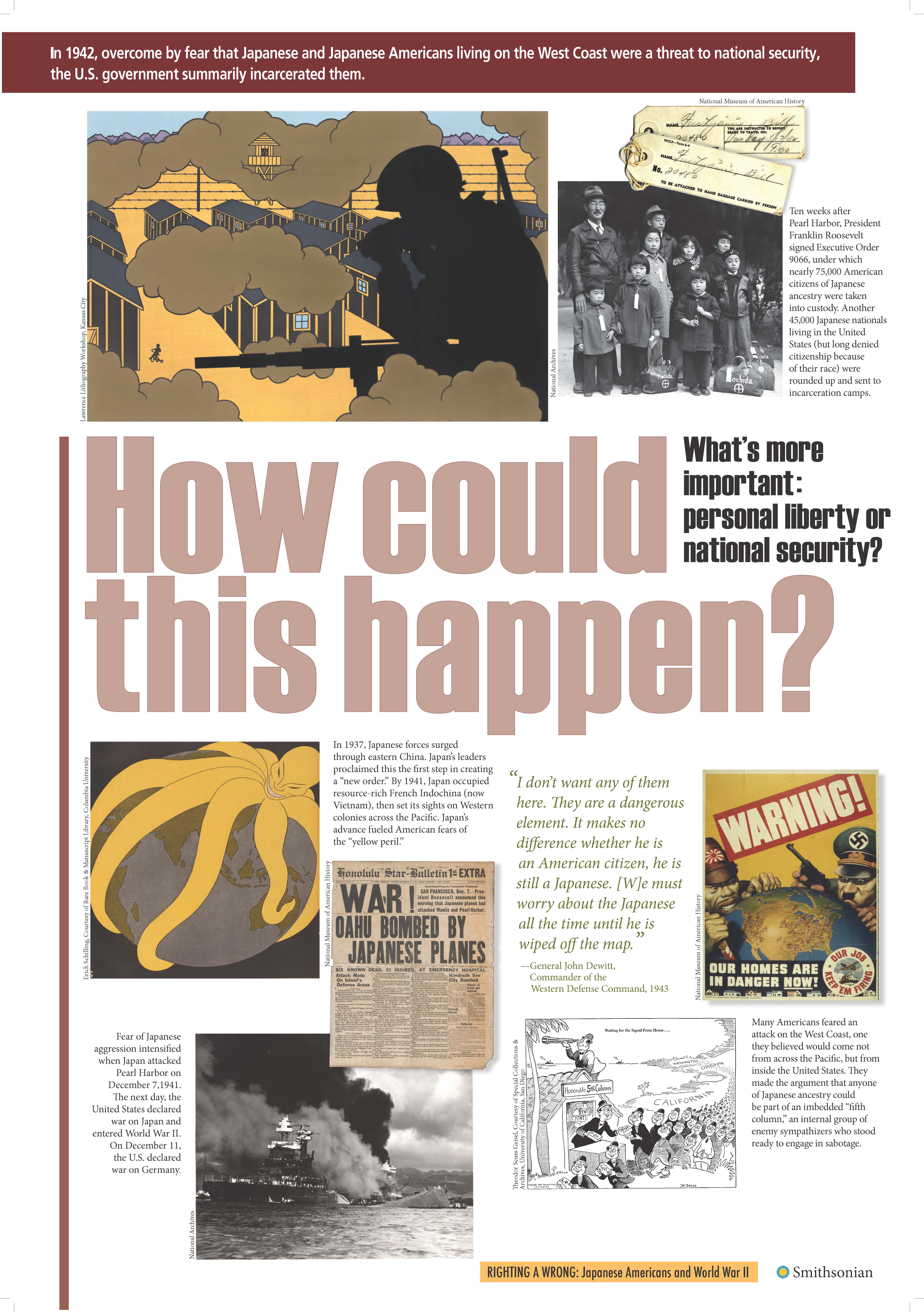 How could this happen?

Look closely at the tags you can see in this photograph and notice that they are on both the people and the bags. What can this tell you about how Japanese Americans were treated when they were evicted?

This poster shows a dramatic image of Japan, symbolized by the yellow octopus, taking over the globe. In your opinion, why might an exaggerated image like this have reinforced people’s fear of Japan and Japanese Americans?

This cartoon was drawn by Theodor Geisel, also known as Dr. Seuss, depicting Japanese Americans and Japanese nationals lining up to get TNT (bomb-making supplies)and awaiting a “signal from home.”According to this cartoon, what did many Americans fear? Where does the word “home” refer to? 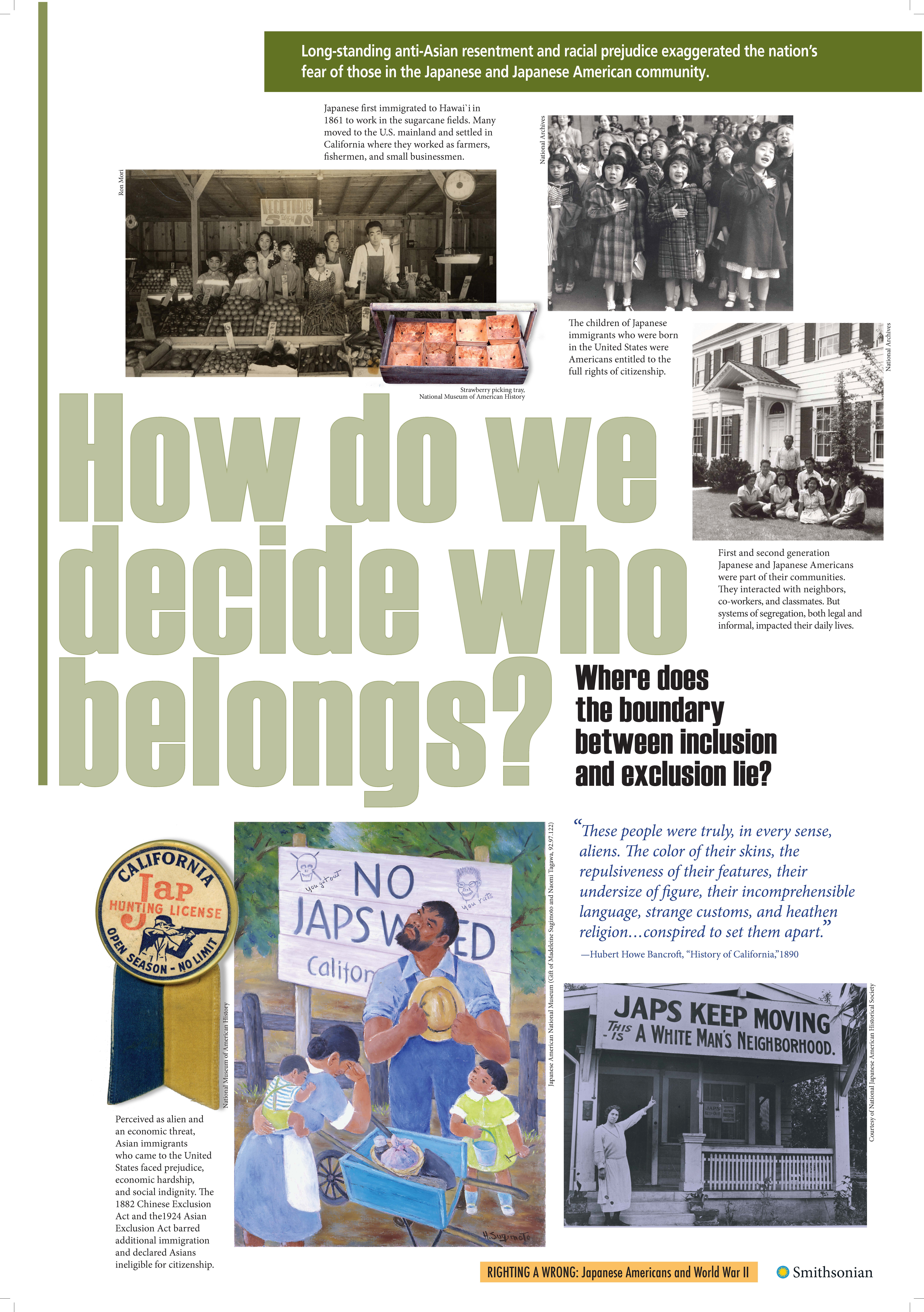 How do we decide who belongs

Where does the boundary between inclusion and exclusion lie?

Look closely at this photograph and the note at the top. What can this image tell us about how Japanese Americans and nationals built and felt part of a community in the United States?

This image depicts natural-born American children saying the Pledge of Allegiance, a common practice used by many American schools to start each school day. Compare this to the quote by Hubert Howe Bancroft.

“Hunting License”pin. This political statement pin used extreme hyperbole to express an anti-Japanese sentiment. What reaction might this pin have evoked among the Japanese American community? 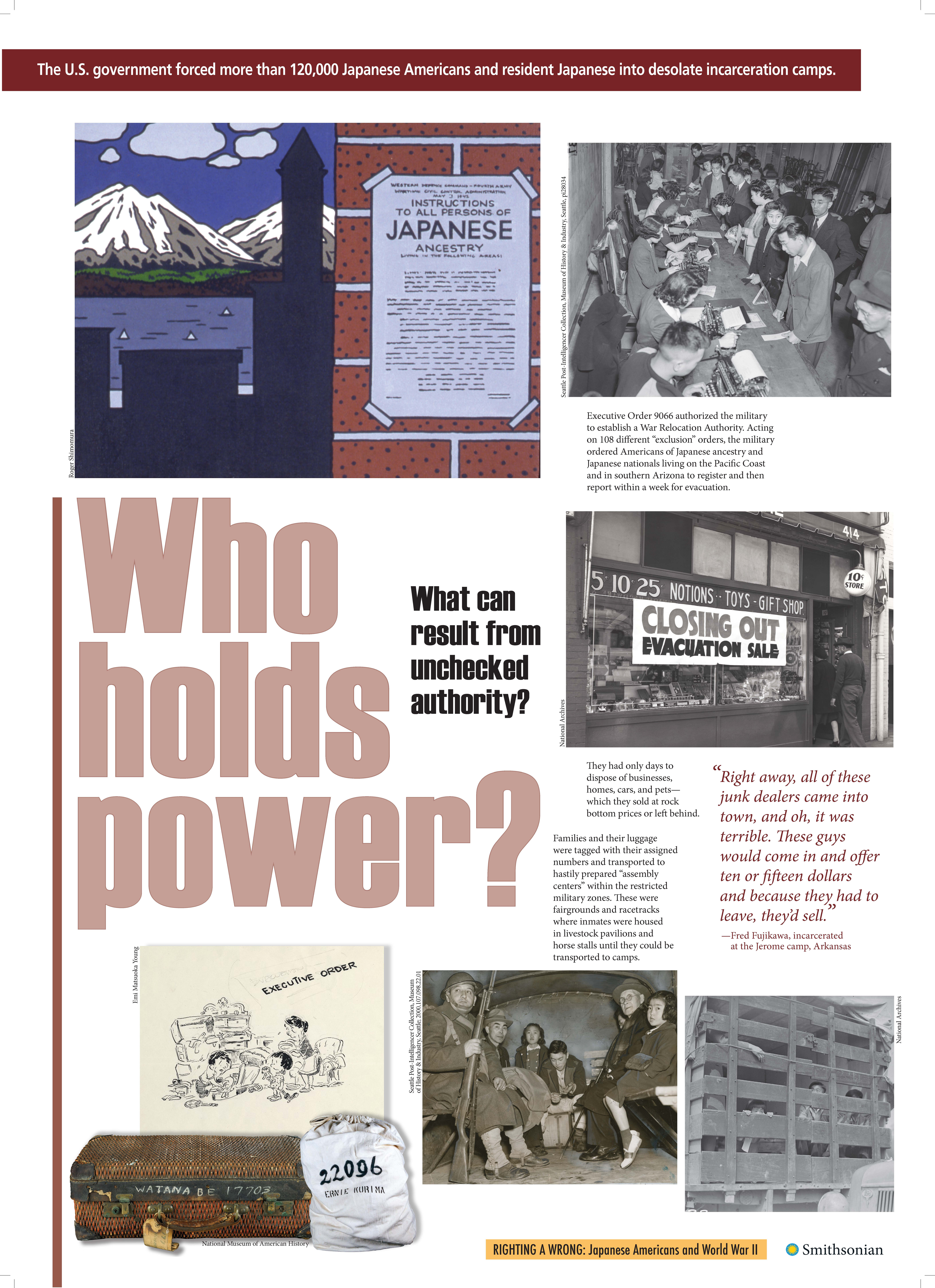 What can result from unchecked authority?

Notices, like the one shown in this painting, were posted in 1942 to announce the removal of all Japanese residents from identified areas to incarceration camps. They read in part: “. . .All persons of Japanese ancestry, both alien and non-alien, will be evacuated from [this] area by 12 o’clock noon. . .”How would this make you feel if you saw this in your neighborhood?

Once notices like the one shown above were posted, families had only days before they were forced to leave. What emotions do you see depicted on the faces of the Japanese American family in this drawing?

This photograph depicts a Japanese American family in the back of a military truck being escorted by a soldier. The forced removal of persons of Japanese ancestry was facilitated by the U.S.military, per the instructions of Executive Order 9066. Why might the military have been put in charge? How do you think this would have affected people’s feelings of fear or security? 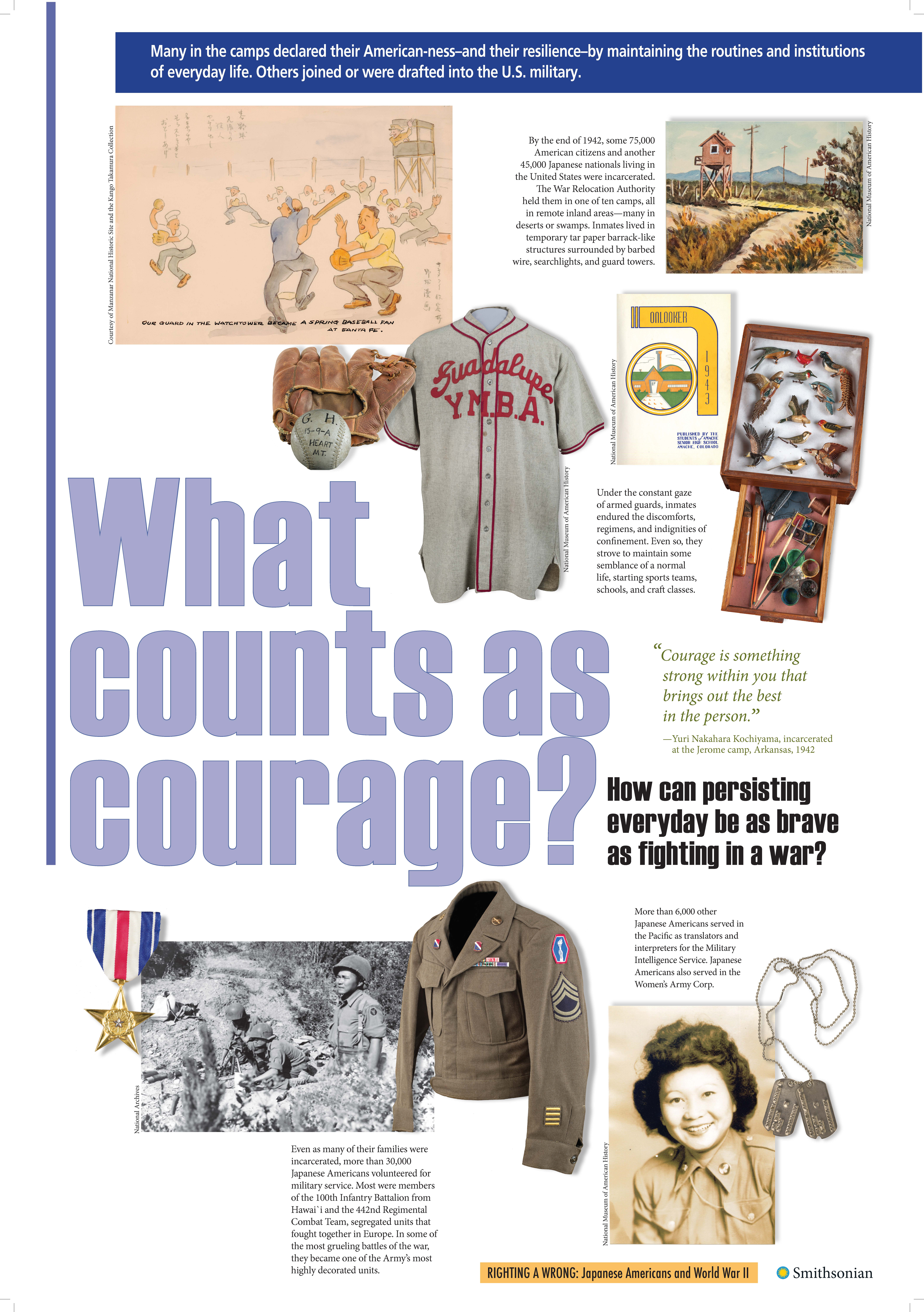 What counts as courage?

How can persisting every day be as brave as fighting in a war?

Look closely at this painting of the boundary of an incarceration camp and notice the barbed wire and guard tower. What might it have felt like to live within these barriers? This drawing,along with the jersey, mitt,and baseball,depict a popular pastime in the incarceration camps as well as across the country. How do the items demonstrate the resilience of people who were incarcerated?Why might something as simple as playing baseball in the camps be a courageous act?

The 442nd Regimental Combat Team designed and wore this Liberty Torch patch on their uniforms while fighting in Europe. What might this symbol represent and why might a Nisei soldier want to wear it with pride? 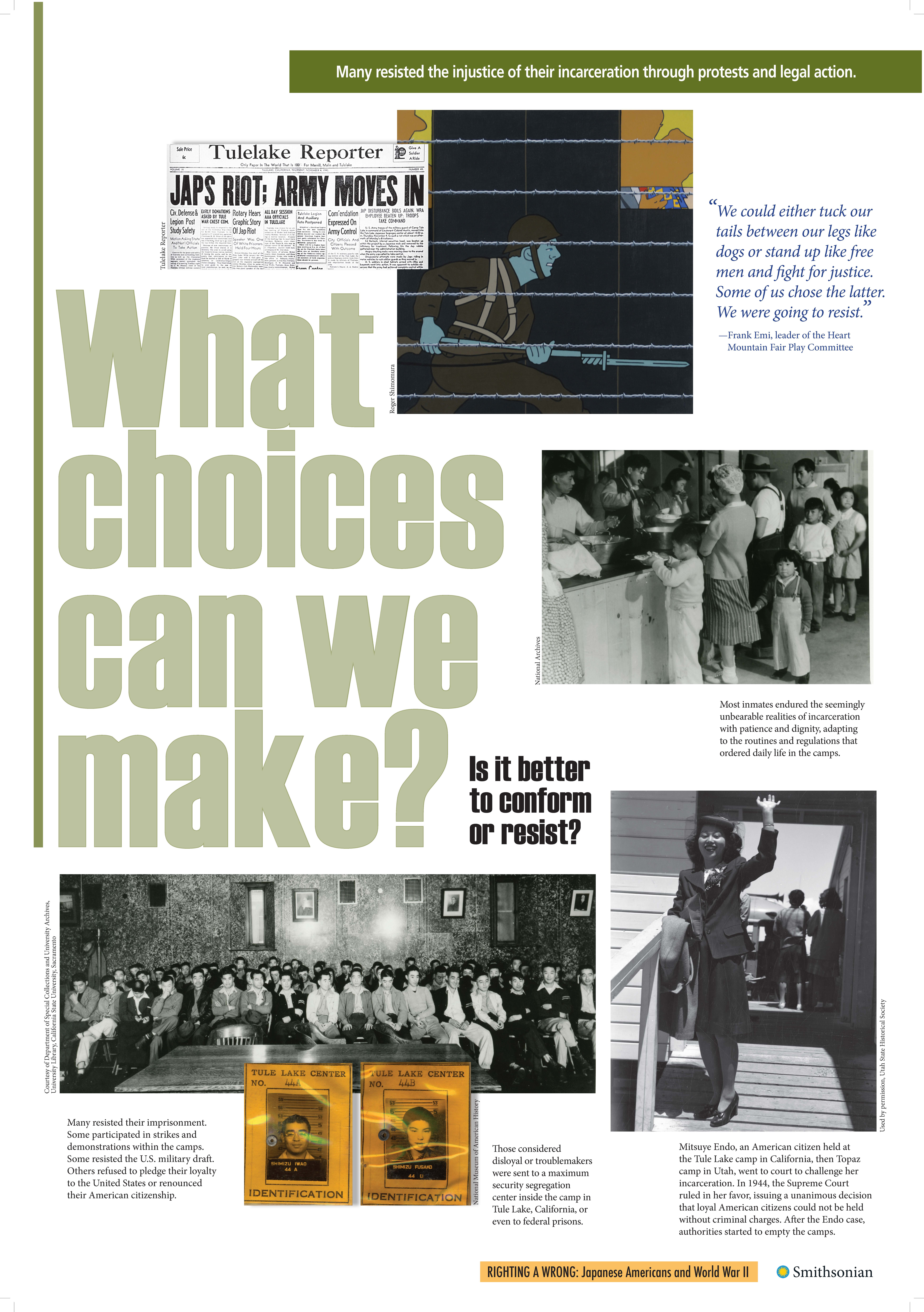 What choices can we make?

Is it better to conform or resist?

Look at the painting and newspaper together. What type of event do these resources describe? What are the implications of a newspaper headline that says the U.S. Army acted to suppress actions taken by American citizens?

Closely examine the people in this photograph. What emotions do you see?

These badges belonged to two incarcerated Japanese Americans who tried to renounce their American citizenship and return to Japan. Why might they have chosen to resist in this way? 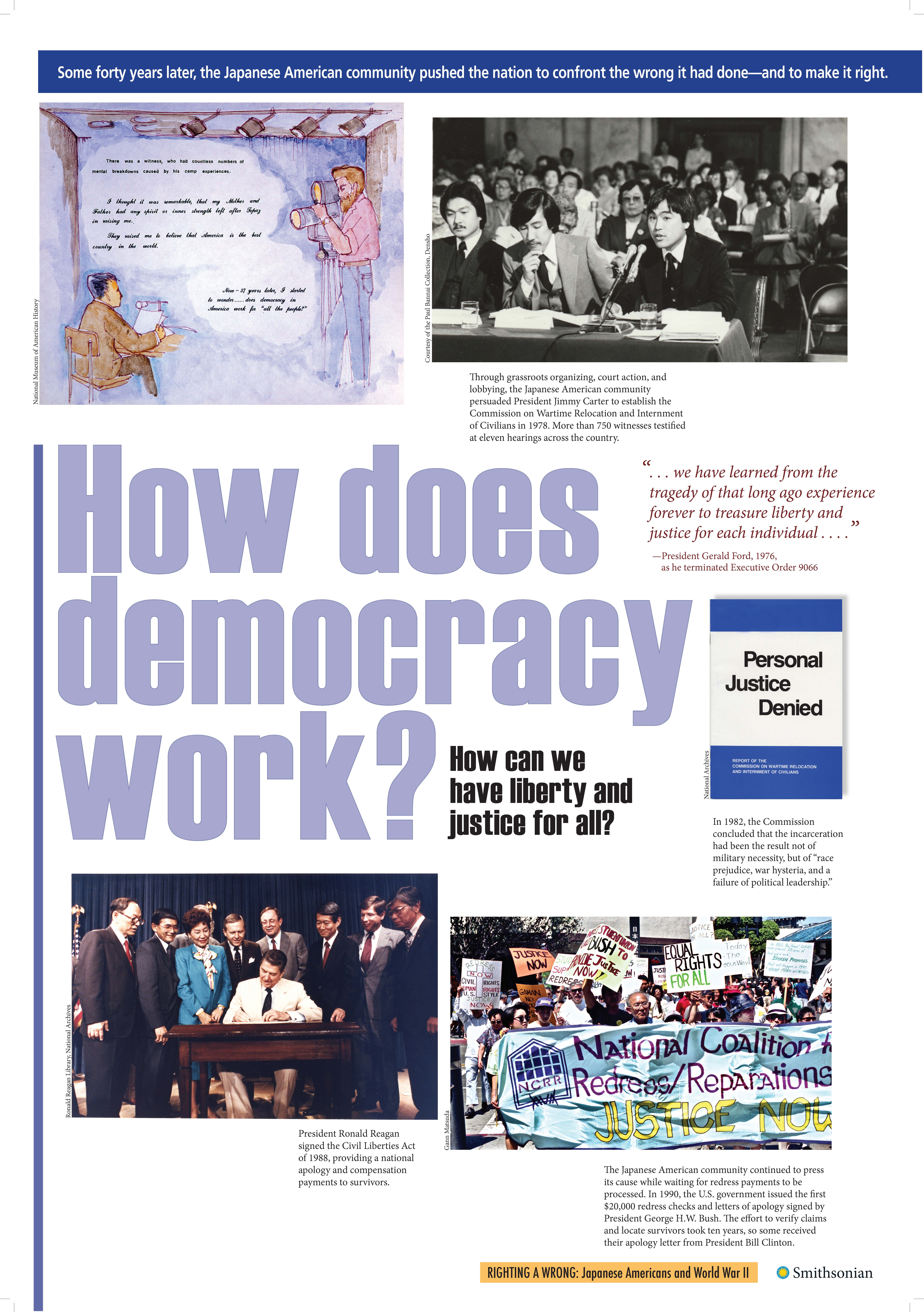 How does democracy work?

How can we have liberty and justice for all?

Read the testimony of the man who was incarcerated as a child (in the drawing in the upper left). Compare his sentiments to the quote from President Ford.How do they differ? Why might each have a unique perspective?

Examine the expressions of the people in the photo. How do they feel about their accomplishment? In your opinion, is this act of legislation enough?

Look closely at the signs held by individuals at this rally. What are they asking for? How do these demands react to and go beyond what was provided for in the 1988 legislation? 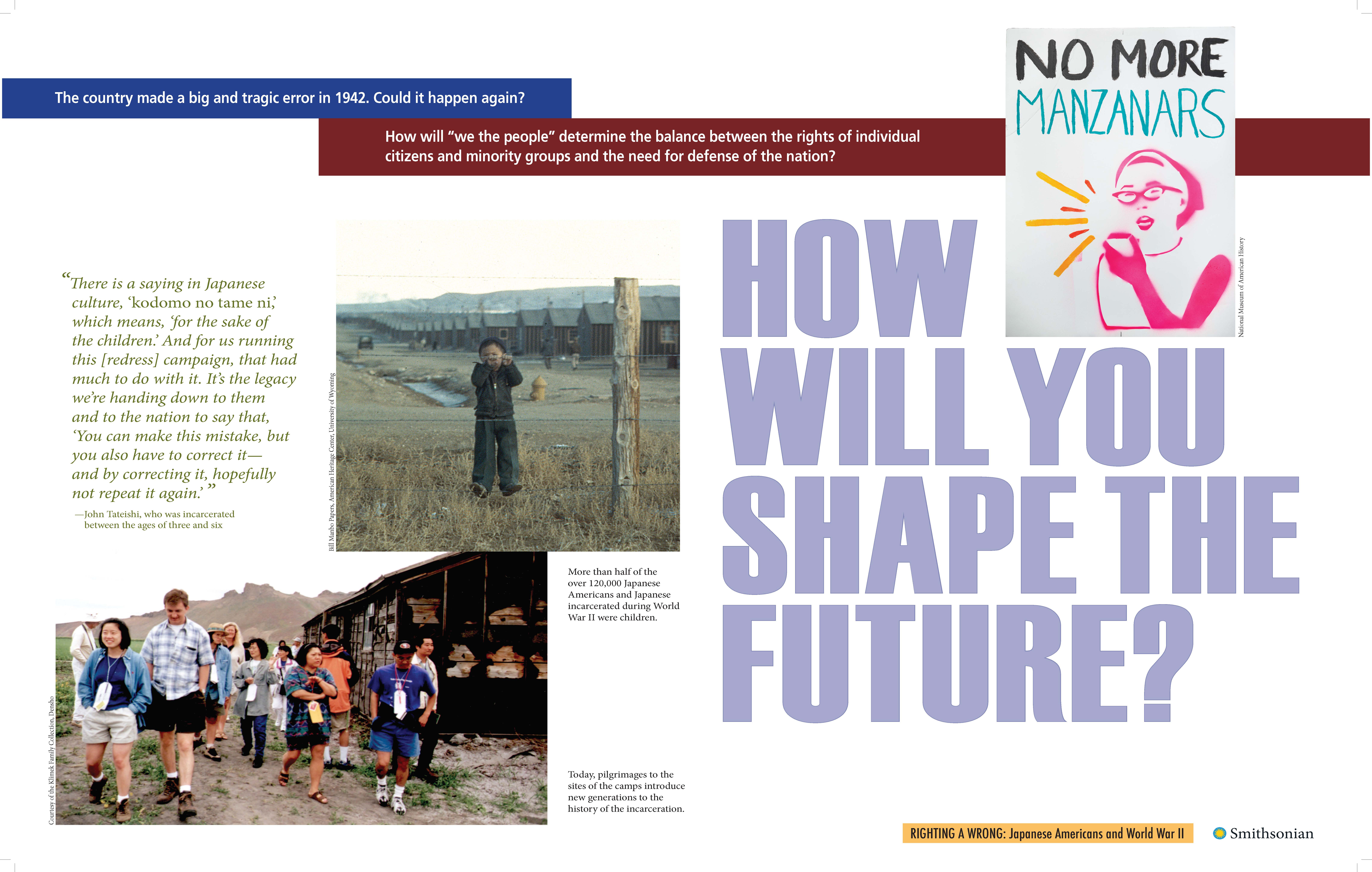 How will you shape the future?

This photograph, taken between 1942 and 1944, shows a young boy at the Heart Mountain incarceration camp in Wyoming. Think about what it might have been like to be a child in the incarceration camps. How might this experience shape one’s perspective and understanding of current events?

Carefully read the quote from John Tateishi. Why is it important to think about what the legacy of this history will be? What is the legacy he wants to leave behind?

The protest sign references the name of one of the most well-known incarceration camps,called Manzanar. Compare the actions represented by the protest sign to those shown in the photograph of younger generations visiting the sites of Japanese incarceration camps. In your opinion, how can we learn from the past to shape our actions today and strive to create a more humane future?