MSM and the Civil War: Home

Material related to MSM faculty who served in Civil War, and to the general history of Rolla in the Civil War 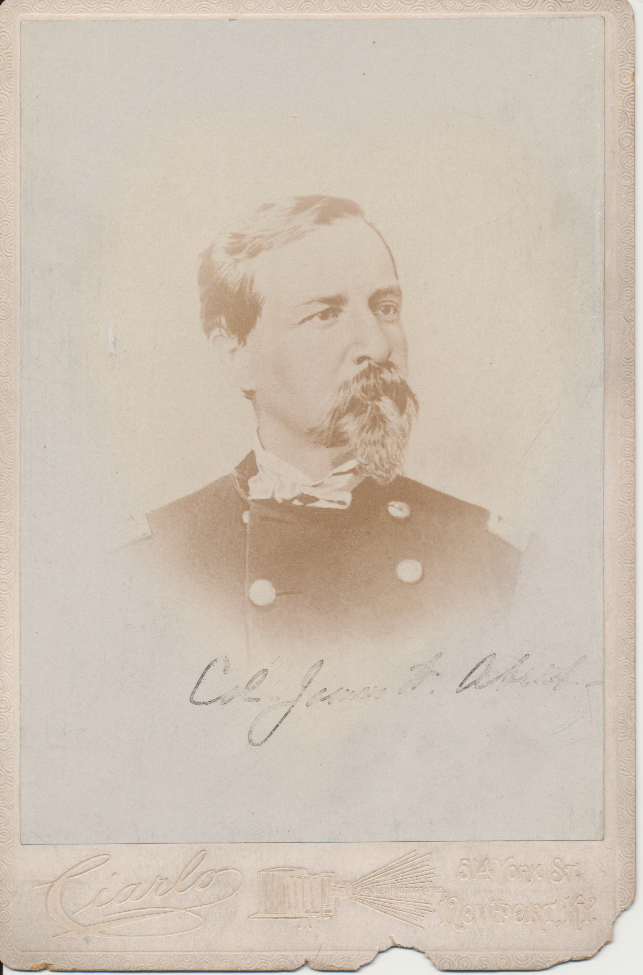 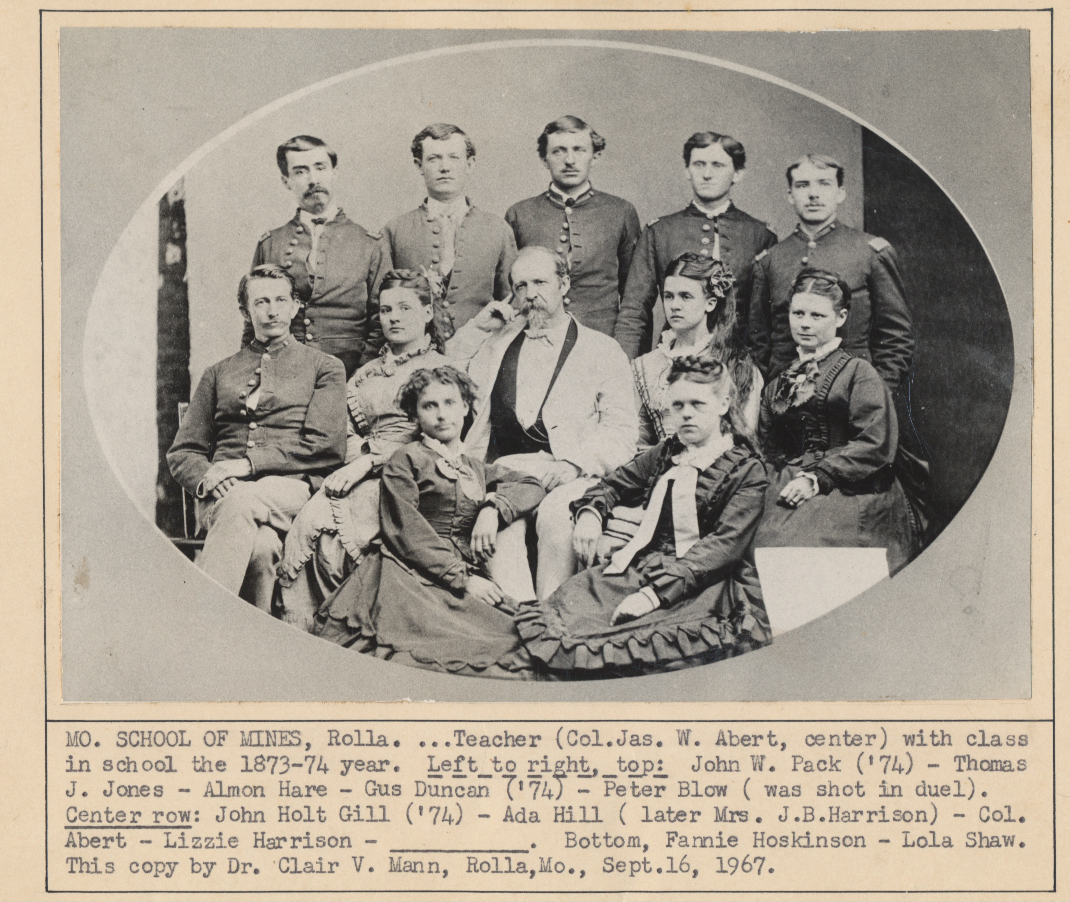 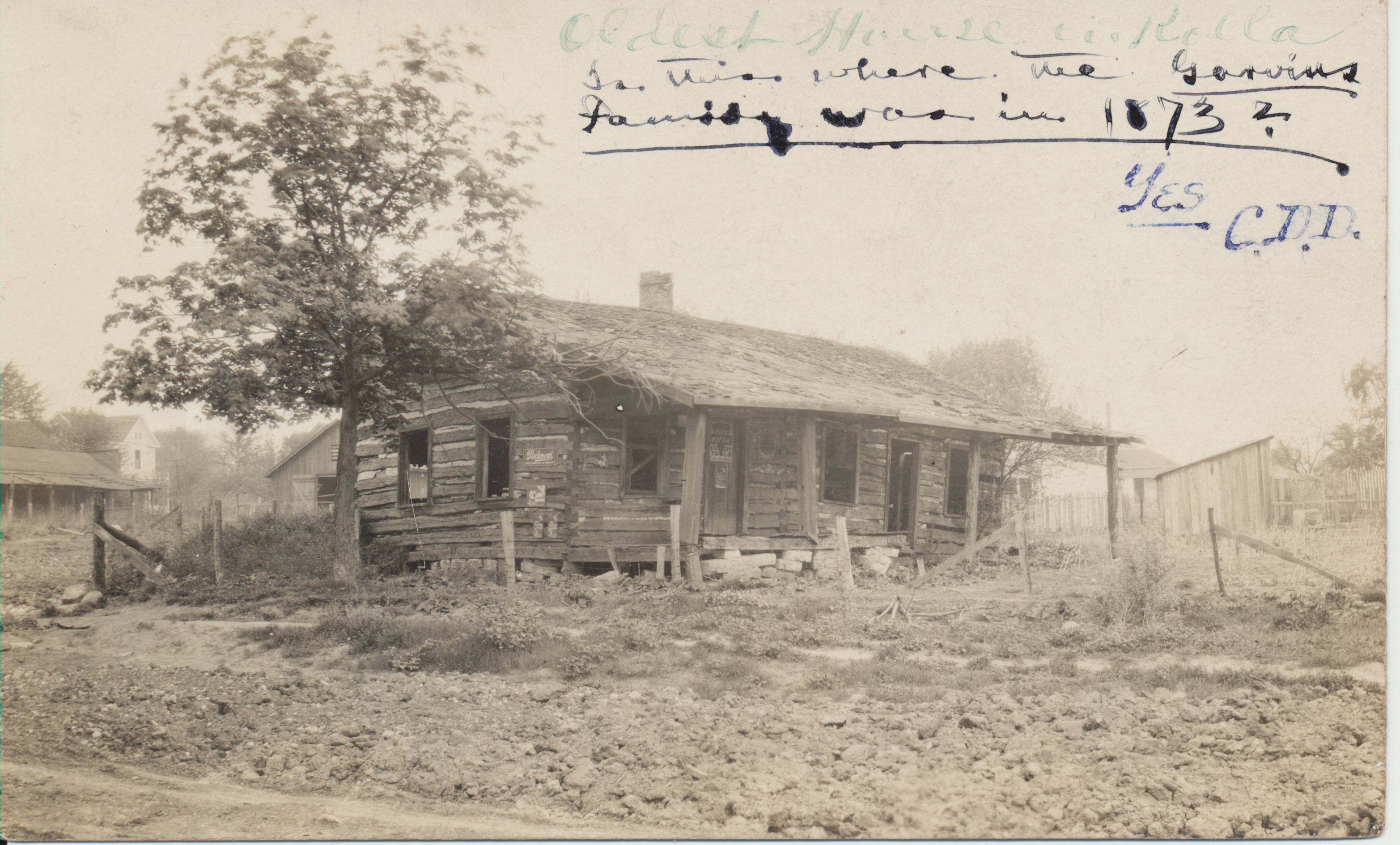 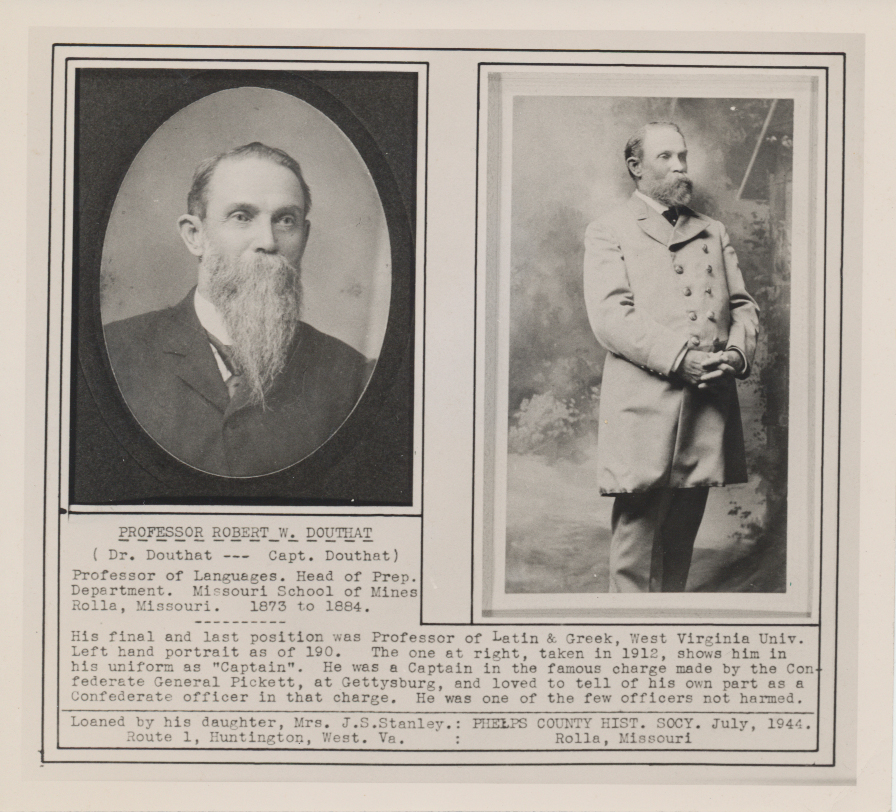 Professor Robert W. Douthat (Dr. Douthat, Capt. Douthat) Professor fo Languages. Head of Prep. Department. Missouri School of Mines Rolla, Missouri. 1873 to 1884. His final and last position was Professor fo Latin & Greek, West Virginia Univ. Left hand portrait as of 190. [sic] The one at right, taken in 1912, shows him in his uniform as "Catpain." He was a Captain in the famous charge made by the Confederate General Pickett, at Gettysburg, and loved to tell of this own part as a Confederate officer in that charge. He was one of the few officers not harmd. Loand by his daughter, Mrs. J. S. Stanley, Route 1, Huntington, West. Va. 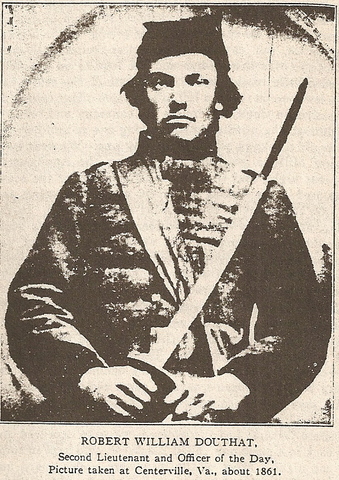 Second Lieutenant and Officer of the Day.Picture taken at Centerville, Va. about 1861. Photographer unknown. Part of the Clair V. Mann Collection (R:3/3/5) 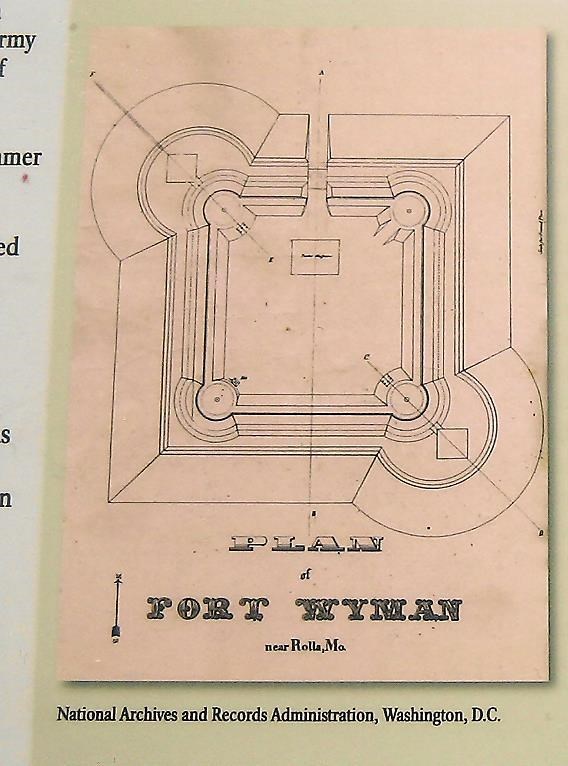 Plan of Fort Wyman in Rolla, MO. Was originally selected location for the Missouri School of Mines and Metallurgy. Original held by the National Records and Archives Administration, Washington, D. C.. 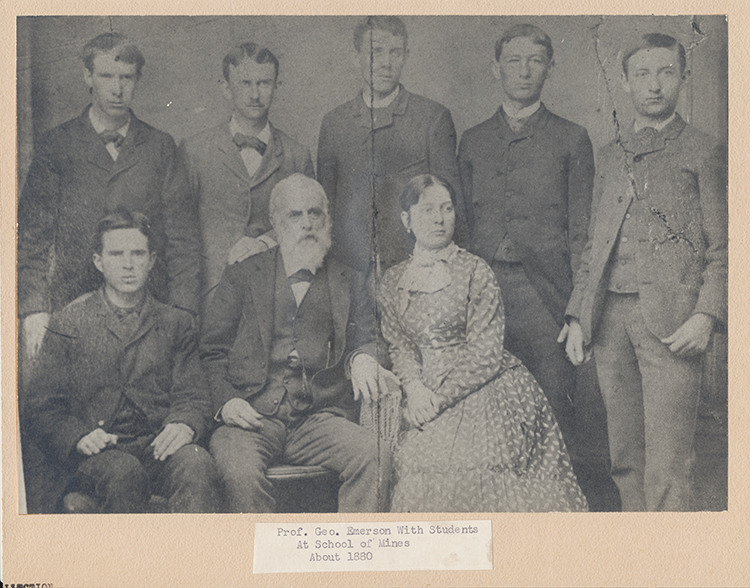 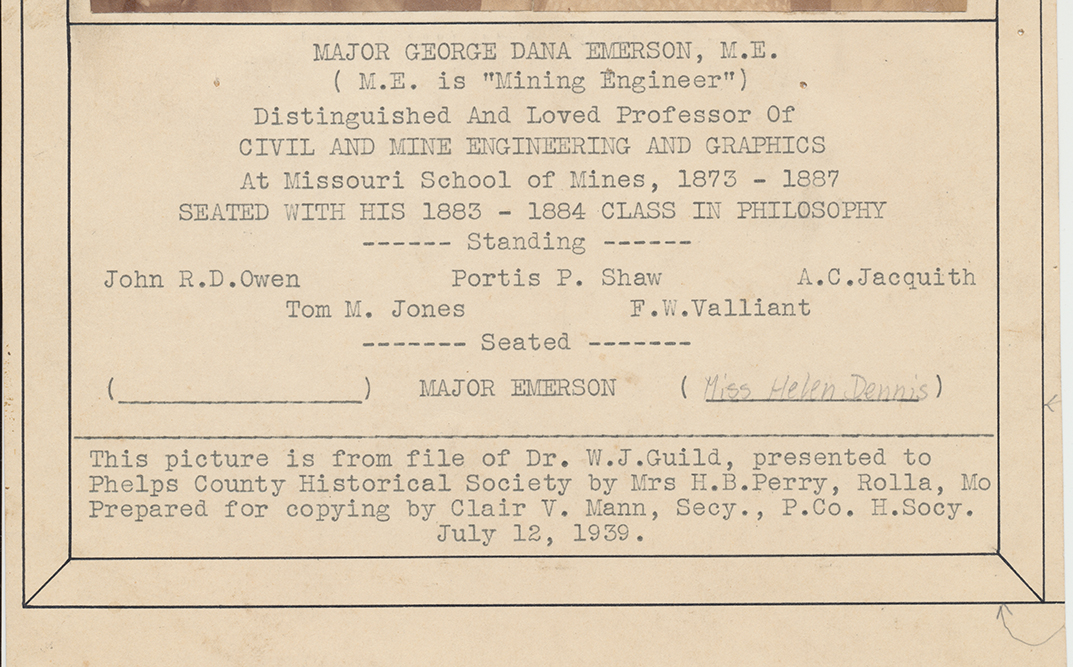 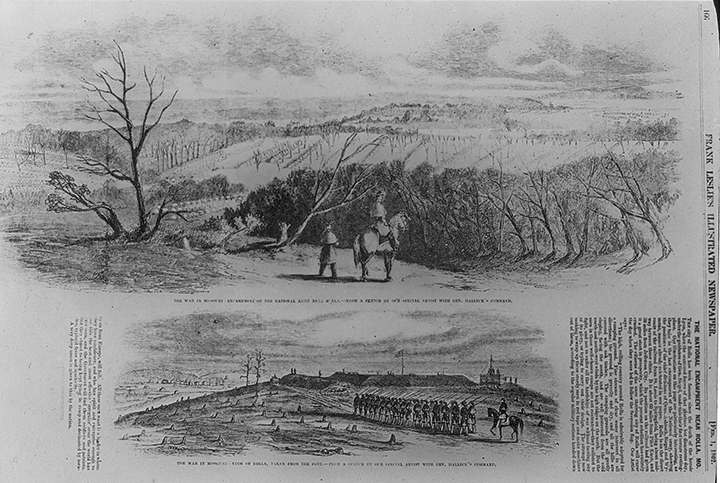 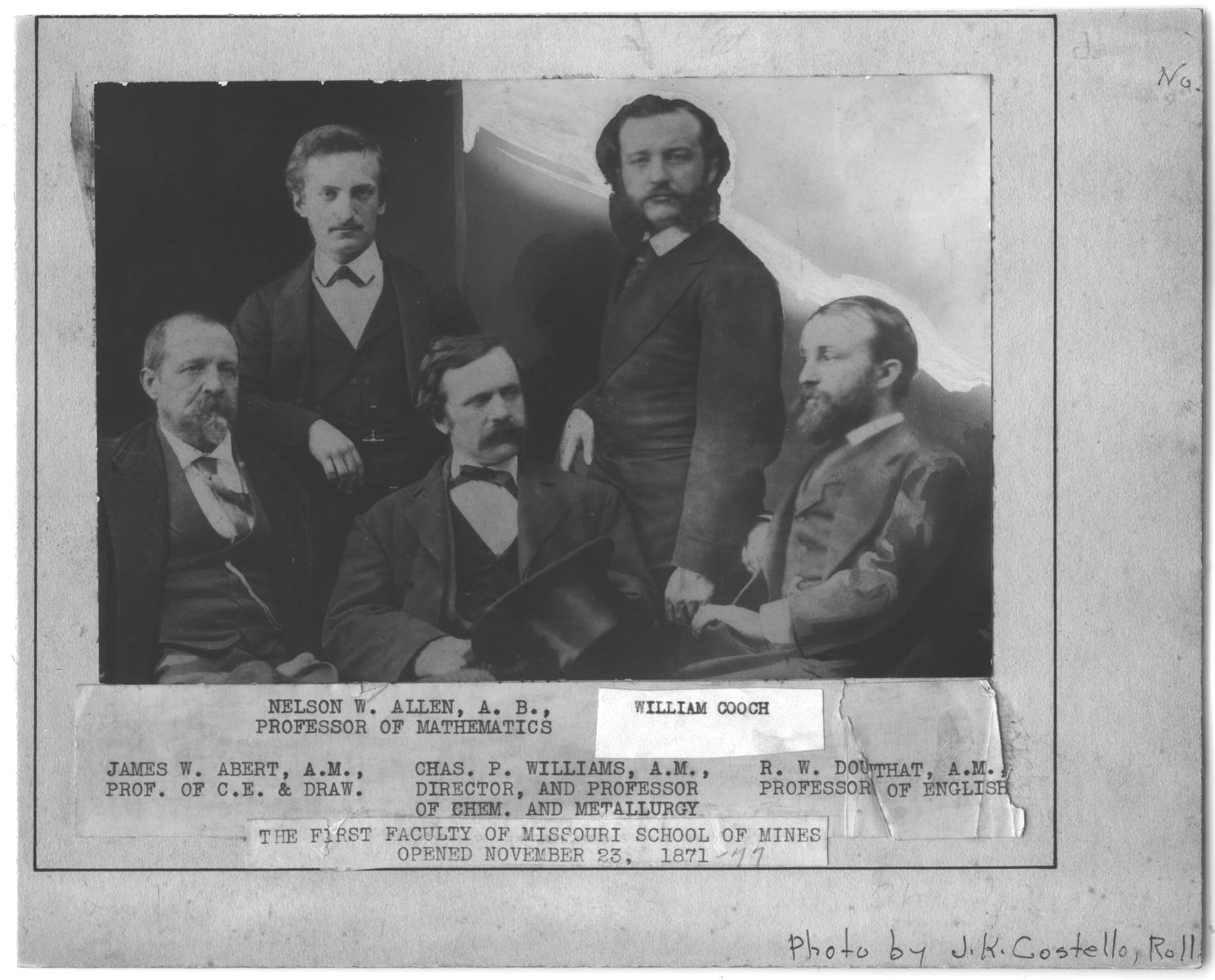 James W. Abert (1820 Nov 18-1897 Aug 10) graduated from Princeton and West Point (where he was  classmate of Ulysses S. Grant), and served in the United States Army from 1842 to 1864. His military career began as a member of the Corps of Topographical Engineers, headed by his father, John James Abert. Abert participated in several western expeditions, including Frémont’s third expedition, during which he surveyed the length of the Canadian River.

In 1845 Abert started the first railroad reconnaissance survey to Rolla, MO. At that time he met John Webber, the founder of Rolla.   In 1846 he joined the Mexican War  for a year. Under General Stephen W. Kearny, he created the first survey of New Mexico.During this survey he created a tribal dictionary, and detailed lists of flora and fauna. He was an accomplished artist whose work often decorated his official reports. After the Mexican War, he returned to West Point to tech drawing for two years.

During the Civil War her served first in the Shenandoah Valley (1861-1862). He was under General Banks, and in the campaign of the Rapidan. He designed and constructed a pontoon bridge over which the army crossed the Potomac near Harper’s Ferry. In 1863 he was assigned  to the US Army Corps of Engineers. He ws injured in a fall from his horse during the Maryland Campaign, and resigned from the Army in 1864.

After working for a few years in mercantile and as a patent examiner, he reentered the education profession. He came to Rolla, MO and the Missouri School of Mines and Metallurgy in 1872 as the Chair and Professor of Civil Engineering and drawing. Dr. Clair Mann said of his drawing instruction;“The work his class did was so excellent that a Committee of the Missouri General Assembly who saw it on exhibit in the old “Rolla Building” said that there were two schools of design in America where such work could be done – one was at Harvard University, and the other at Rolla.” The S&T Archives holds several portfolios done by his students and a watercolor done by Abert..

In 1873 he became the Professor of Applied Math and Graphics, and was also responsible for military inspection and instruction. Also in 1873, Robert W. Douthat and George D. Emerson joined the MSM faculty. He left MSM in 1877.

He was a leader in the formation of Grand Army Post No. 178 (James W. Abert Post), which is listed incorrectly in GAR online records as the Albert Post. the Post was dissolved in 1937. The S&T Archives has a post insignia, which is on display on the third floor of Curtis Laws Wilson Library in the Civil War display case.

Captain Douthat started college at Emory and Henry College but left when the college closed in April 1861 for the duration of the Civil War. He joined a Confederate state militia, and then in April 1862 was made First Lieutenant under Captain Fowlkes of the 11TH Virginia. He was promoted to Captain in May 1862.  He then went to Gettysburg, and was part of Pickett’s Charge. He was the only captain in the 11th Virginia to survive Pickett’s Charge (this is not reported consistently).  A copy of his lecture on Pickett’s Charge was published in 1905 (see list of documents on left side of screen). He toured the country delivering this lecture, and died while on a lecture tour after his retirement from West Virginia University.

He and his entire company were captured after the Battle of  Five Forks with Sheridan’s forces on April 6, 1865, and imprisoned on Johnson’s Island in Lake Erie. On June 18, 1865, he took the oath of allegiance to the United States and was released from the Federal prison.

To see a larger version of this image, right click and select "View Image".

After Douthat's release, he taught at various schools and farmed before joining the faculty of Missouri School of Mines and Metallurgy from 1873-1884.

He advocated for the school to build dormitories (originally on Ft Wyman hill), and when this wasn’t approved, created his own. At the same time he was advocating for more humanities classes, and created the Western Conservatory of Music.

In addition to starting the music conservatory, he created two dormitories for male Spanish and Mexican students, and for female students in 1882, and also conducted recruitment drives throughout the Southwest to find students for MSM.

The male dormitory was known as ‘Poverty Flats’ and included living quarters for the large Douthat family (nine children). It has been an old tobacco factory located on the north half of the block bounded by Main, Rolla, 7th, and 8th streets (current site of the Vineyard Church). Douthat gave part of the land to the South Methodist Church, contributed to its building.

The female dormitory was known as ‘Black Jacks,’ named after the black oaks on the property. The property was located on the block lying between Main, Park, 9th, and 10th streets. This is now the parking lot across from the Leach Theatre.

While in Rolla, Capt. Douthat became a third degree Mason.

After Capt. Douthat left Rolla, he served at several more schools before retiring on a Carnegie pension from West Virginia University. A copy of his lecture on Pickett’s Charge was published in 1905 (see list of documents on left side of screen). Artist N. C. Wyeth gifted Douthat the painting “The Scout” (aka “Mustered Out”) which is still held by the family.

Douthat toured the country delivering his popular lecture on Pickett’s Charge, and died while on a lecture tour after his retirement.

George D. Emerson is a bit on an enigma. He attended law school briefly before beginning a career as a largely self-taught mining engineer in the upper Midwest (Minnesota, Ohio, and Michigan) alongside his younger brother, Luther. He served as editor for both the Portage Lake Mining Gazette and the Lake Superior Miner. He served as Assistant Engineer for the Sault Ste. Marie ship canal (part of the Soo Locks project).

His father, Caleb Emerson, was an abolitionist and lawyer. The Caleb Emerson family papers are held by the Western Reserve Historical Society and include George’s military materials. The Internet Archive contains a copy of the Dana Family in America (https://archive.org/details/TheDanaFamilyInAmerica), and provides additional genealogical information for George.

He was mustered into service in the Union Army during the Civil War on Dec 26, 1862 as Captain, Company C, 1st Michigan Engineers and Mechanics to serve for 3 years. He was later transferred to Company L, in the same regiment. He was mustered out with honorable discharge as a Captain on April 30, 1865 in Nashville. While he is identified as ‘Major Emerson’ in the Mann collection, he was indeed a captain according to military records and his tombstone (https://www.findagrave.com/memorial/112257541/george-dana-emerson ).

During the War he was Principal Assistant to Col. William E. Merrill, the Chief Engineer of General Thomas. As such, he made surveys of the area around Chattanooga and Nashville, and assisted in the construction of bridges, blockades, and fortifications.

In the summer of 1873 he was appointed the Chair of Civil and Mining Engineering at the Missouri School of Mines and Metallurgy, and taught here until 1887. He lived with his sister, and the pair were well regarded and considered cultural supporters.His life after leaving Rolla is unknown. The small demonstration steam engine he used in his classes is in the S&T Archives.

Emerson patented the Emerson Rail Bender in the 1870s, and it is still in use. The Mann collection includes a sketch of the apparatus. The Harvard Art Museums hold a photographic print of the bender by Paul Rowell in their permanent collection.